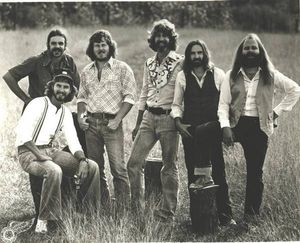 McGuffey Lane is a country rock band from central Ohio. In 1972 founding members Steve George Reis (bass/ vocals) and Terry Efaw (steel guitar/ gut string guitar/ electric guitar) were a duo called "Scotch and Soda". When they added Bobby Gene McNelley (vocalist/ guitarist) they renamed themselves McGuffey Lane after the street of Steve's Athens Ohio home. As their popularity grew they added Dick Smith (drums/ vocals) and Stephen "Tebes" Douglass (keyboards/ harmonica/ vocals). In 1977 McGuffey Lane started playing at Zachariah's Red Eye Saloon and soon became the house band. At that point they added John Schwab (vocalist/ guitarist) who was opening for them as the sixth and final member of the original McGuffey Lane.

McGuffey Lane played at Zachariah's through 1980. In August of 1980 they released their first self-titled album on Paradise Island Records selling 40,000 in the first three months. The album reached #1 in Columbus during the fall of 1980 which gained the attention of Atlantic Records. Atlantic released the album nationally on it's Atco Label with sales of 175,000. During the early 1980's McGuffey Lane was a national act touring with Charlie Daniels, the Allman Brothers, The Judds and Marshall Tucker Band. In 1981 they released their second album "Aqua Dreams" followed by their third album "Let the Hard Times Roll" released in 1982. In early 1984 Tebes Douglass was killed in an automobile accident returning home from a show in Dayton. They released their fourth and final album for Atlantic "Day by Day" and dedicated it to Tebes. After the release of "Day by Day", Bobby Gene McNelley left the band to pursue a solo song writing career.

In 1985 McGuffey Lane went back to their Ohio roots playing clubs, concert halls, fairs and festivals. In 1986 they released "A McGuffey Lane Christmas", a fundraiser for the Central Ohio Lung Association. In 1990 McGuffey Lane disbanded after a tour through the state and a last night at the Newport Music Hall. In 1993 they did a "one time show" at the Newport and in 1995 they released "Greatest Hits Live and More". At that point McGuffey Lane regrouped featuring John Schwab, Terry Efaw and Casey McGowan from the 1980's line up. They were joined by veteran Columbus area musicians including Molly Pauken (mandolin, acoustic guitar, vocals). In 1998 they released "Call Me Lucky" . It was during 1998 that current McGuffey Lane members joined the band. Randy Huff (drums/ vocals) joined in the summer of 1998 and Kevin Reed (harmonica/ vocals) joined at the end of 1998.

In 2001 McGuffey Lane organized the First Annual Zachariah's Red Eye Saloon Reunion featuring themselves and other acts that performed during the Zach's days. In 2002 they released all acoustic CD "Wood" which included popular concerts songs from the late 1970's but never previously released. In 2003 the Zachariah's Red Eye Saloon Reunion moved to Promo West Pavilion and has been held there (now Express LIVE!) every year since. Finally in 2006 after years of fighting with Atlantic over the rights to their first four albums recorded in the mid 1980's, Rhino Records released them in 2 albums sets. The first self-titled album and "Aqua Dreams" in one set and "Let the Hard Times Roll" and "Day by Day" in the second set.

In 2010 McGuffey Lane released their 10th CD "10" on Lick Records which was co-founded by John Schwab. In 2011 "Bartender" from the "10" CD was released as a single. It reached #50 on the national country charts (Music Row Magazine). In June 2017 McGuffey Lane released their 11th and latest CD “Legend of the Red Eye” on Lick Records. In a review of “Legend of the Red Eye” Dave Culbertson writes: “If you like the “country” side of The Lane…you should love this one. It is an interesting mixture of originals and masterfully-done covers of some of the country and country-pop classics from a variety of artists…all well done…many times, better than the originals.” In November 2017 “Cowboys Like What Cowgirls Do” by Steve George Reis from the new “Legend of the Red Eye” was #1 on the Alternative Country Music chart. The 2020 Zachariah’s Red Eye Reunion was held on Saturday January 18th at Express LIVE in downtown Columbus Ohio to another capacity crowd. The 2021 Zachariah's Red Eye Reunion scheduled for Saturday January 30th was canceled due to the Covid pandemic.  The 2022 Zachariah's Red Eye Reunion is scheduled for Saturday January 29th at Express LIVE.

McGuffey Lane's history mirrors one of the songs from their 2002 "Wood" album. "I've been up and down and all around my head in the clouds and my feet on the ground. Don't you worry baby don't you worry about me. Cause I've survived everything that comes and goes. I still know which way that old north wind blows. After all these years I'm "Runnin' Wild and Free". McGuffey Lane is still going strong with the three original surviving members (Steve George Reis, Terry Efaw and John Schwab) in the band. McGuffey Lane still performs 20+ concerts annually. The Journey Continues and "It's A Good Day". 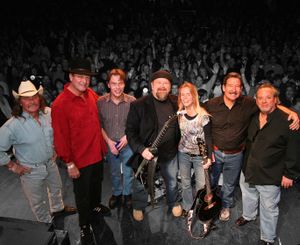